This is the story of our most viewed post, by a factor of more than 15 times.

The post was called I don't necessarily want to kill myself... I just want to become dead somehow

Have a look at the stats for our top posts, all time. 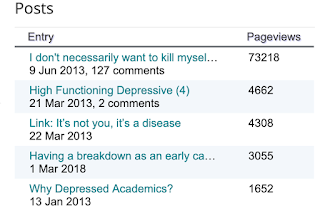 I just changed that introductory sentence from "most successful" to "most viewed".  Our most successful post would the one that helped most, whether it be the author or readers of the post, or anybody. I don't know what post that is.  But  "most viewed" is unarguable. Also most commented on, again by many many times.

But that post feels very like a mixed blessing. Somehow it has sparked so many people to express their pain, and the pain seems so overwhelming.

The post title, "I don't necessarily want to kill myself", comes from this wonderful comic: "Depression Part Two" by the wonderful Allie Brosh.  The comic is a long one and expresses a lot about how I felt.  The phrase I used comes in this panel: 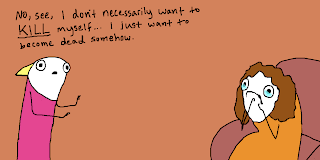 The post itself is not massively insightful. I do remember an early comment which criticised me for stealing the title from somebody else's work, which seemed odd and that comment disappeared quickly - either deleted by the author or my co-founder of the site deleting it as a rude comment.

As time passed and we moderated further comments, we saw more and more painful and deeply pained comments of people it had struck a chord with.  You can if you wish go and find the comments yourself, but here are some excerpts. In fact to reduce triggers I'm only taking some indicative comments, not the worst things people said:


Even on a great day, given the choice I would opt out of living.

I feel as though my existence is worthless

I hate my existence, I hate the world I live in.

Wishing I didn't exist is an everyday thing for me.

I completely relate to it and this was almost word for word what I typed into google.

Those are just quotes from the first five comments, not selected highlights.  We have more than 100 comments and many of them are hundreds of words long.  The pain is just so immense, and these are people who don't want to kill themselves.  It's heart-rending to read the comments and there is so little or nothing we can do to help. At the same time of course it's humbling to have written something that touches so many people. And we are pleased to have been able to let people speak for themselves on our site.

Being a sounding board like this is part of what we wanted for the site, but most people posting are not academics, or don't say they are.  Why?  What happened?

I think the clue is in the quoted text of the last comment: "what I typed into google".  I think that typing in that you didn't want to kill yourself had a good chance of landing at our page.  I think it used to be on the first page of results and it's still in the first few pages.  (The first hit is now and has for some time been for a counselling service for the suicidal, which is a good match, whether through an automatic process or manual intervention.)

So somehow we hit on something that doesn't get a lot of attention (of course on the back of a great artist's work on the same topic.)

But the human pain we accidentally uncovered, and seeing it in our comments as we moderate them, is ...  ...  .... sorry I don't even know how to finish that sentence.  But it's a remarkable thing and I think clearly shows why it's The Post.